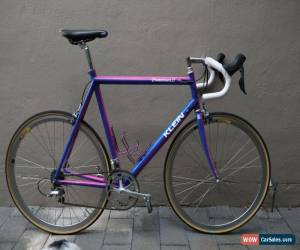 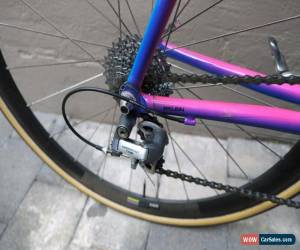 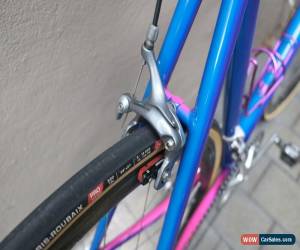 *love* this bike and the idea of letting it go is killing me, but it’s simply too big. Here's the detail: 1993 Klein Quantum II
- 59cm
- Horizon linear fade
- Full Shimano 600 Tricolor
- Modern Claris 8spd levers
- Original 600 levers also supplied immaculate and fully functional
- Original Shimano 600 Tricolor hubset with original QRs supplied
- Velocity Aero rims on 600 Tricolor hub wheelset (pictured Compass tyres will be replaced with nearly new Veloflex Master 25s due to cut on the rear Compass)
- NOS ITM Krystal 100mm stem (cost $300 alone)
- Cinelli 'Giro d'Italia' bars
- NOS Deda Metal Stick seatpost
- San Marco HDM 'non-slip' saddle
- Original Trek purple ano bottle cages
- Silver SpurCycle bell Circa 5000km use since new yes, do mean since 1993 on the original hubs (I was planning to have the hubs built into new silver tubeless wheelset and bought the Velocity wheelset as an interim, but the rims wanted to use became unavailable and had already dismantled the original wheels). Saddle height as pictured is 80cm. Reach from saddle tip to bar centre is circa 57cm. All marks on the frame are shown. This includes *tiny* ding on the non-drive side seat stay which have tried to show as clearly as possible. It is circa 2-3mm across and has absolutely no bearing on the structural integrity of the seat stay as it does not spread far enough.NOTE:  The Zipp 303s wheels with Challenge Paris-Roubaix tyres are not included. HOWEVER, also note that the tyres on the Zipps measure 27mm wide and they easily fit the frame, for those worried about comfort. will sell the frameset with seatpost, stem, bars, headset BB.  Please message me for info on this.Have included couple of other pics to show how the colour pops in the sun; and to show couple of other looks (different tyres, saddles and bar tape).  Nothing from these last two pictures is directly related to this sale in terms of the spec.

Comments and questions to the seller:


Single speed road bike Condition is Used.Centurion cavaletto. Size 58cm. converted it to single speed and flat bar, but still have original gears and brake levers if you want them. Please contact for further details. ...